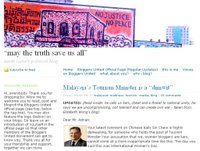 Malaysian women, and the women in cyber space are angered by the sexual slurs hurled by none other than the Minister of Tourism, Tengku Adnan who claimed that: 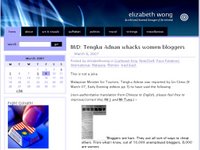 But he didn't tell us why the Malay must kill the Chinese and Chinese kills the Malays and why should the Indians kill everybody else.

Isn't this statement seditious and defamatory? Will police investigate the case under the internal security act? Will women bloggers lodge a police report for sedition and sexual discrimination?
It seems that the whole governmental ministers and UMNO leaders are at odds with bloggers. Who are the bloggers? They are Malaysians. Are they disillusion with the government and more so, with the leaders for their dim-wit stance and idiotic performances?

Maybe, the government had this to say: It's your fault and its your wish, for you have voted us in and made us what we are; so don't compliant. Who are the dim-wits and fools? It's you and we should shut up before we further embarrassed ourselves.

Give them a bigger mandate next round and we will be on the road to the 4th World! Corruption had already been validated, baptised and becomes the grundnorm. In HLA Hart's thesis, it is now the secondary rule of the positivist law and in Kelsen's thesis, it's the grundnorm. To John Austin, it's the Command of the Sovereign that requires us to give habitual obedience, failure to comply, sanctions will be invoke by the authorities. Validity and Efficacy had been achieved.
Posted by Maverick SM at 3/10/2007 11:16:00 AM

Sadly, despite all the crimes committed by umno, the majority of the rural folk will consider people like Adnan and Uncle Joe Baharom to be the saviours of their race, and return them to power again election after election. To them, it is better to be suckled by their own kind than to be saved by the 'kaum pendatang'

UKM students are being classified by their lecturer into kafirs and non-kafirs-- following Hitler's example of classifying people into Aryans and subhumans. This is racism at its worse and as usual the pm closes one eye... http://www.arimiraj.com/2007/03/where-is-respect.html

It is reported in SingChew. We need to see whether it appear in Utusan.

Idiocy always being redefined, the bolehway. 4th world. Wonder who will lead bolehland there for the 'opening ceremony'.

Isn't this statement seditious and defamatory?

...but which blogger is going to make that police report?

It seems that the whole governmental ministers and UMNO leaders are at odds with bloggers.

Give them a bigger mandate next round and we will be on the road to the 4th World!

...thats what they will get come GE nanti,the best opposition can secure around 20 seats...why???

that i dont know, ask the rural voters & they will tell U why.

this is stupid la. it happen everywhere.. their statement is not based on their mind anymore but their thought and feeling

how can the tourism minister make such a racist comment like "the Indians will kill everybody else"?

once again, the quality (or missing quality) of our so-called esteemed ministers show up in their true colors. only God knows where their brains were when such statements were made.

this is why we bloggers need an association, a voice to speak on behalf of us. the banks have ABM... the computer companies have got PIKOM... we need something too... i believe.

I think that the Malaysian electorate must be masochistic to inflict so much pain on itself and for so long.
The main problem is the support given to UMMO by the component parties. If these were to pull out of the alliance, perhaps there is a chance to turn things around.
Further, to encourage these parties to pull out of the BN, the voters, especially those who are non-bumi should withdraw their support from them and instead support the opposition like Keadilan and the DAP.
In fact, something similar has happened to the DAP during the 1999 election when the DAP was badly beaten when it formed an alliance with PAS; their supporters withdrew their support.
So, the same can be done to the component parties of the BN.
Just spread around and it can be done.