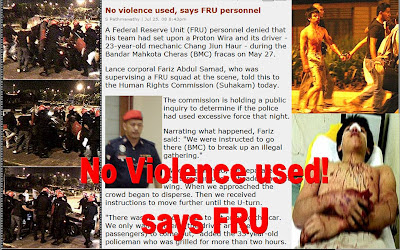 FRU says they never used violence at all; they politely asked Chang to get down from his car.

Lance corporal Fariz Abdul Samad, who was supervising a FRU squad at the scene, told this to the Human Rights Commission (Suhakam) today.

"There was no reason for us to hit or bang the car. We only wanted them (the driver and the passengers) to come out," Fariz said when he was grilled by Suhakam.

According to Fariz, it appeared that Chang’s foot was still on the accelerator pedal.

Fariz also denied that the FRU personnel together with plainclothes policemen had assaulted Chang. "I did not see it (the assault) and I believe there was no violence," he said, maintaining this stand throughout the entire inquiry session. He also explained that there was no order given to charge towards the car.

The inquiry panel members also asked Fariz if he had witnessed any FRU personnel being injured in the incident. The lance corporal replied that he was not aware of any injuries at that moment but had later accompanied the two personnel to file a police report and seek medical treatment at the Kajang Hospital.

The duo were identified as constable Mohd Azniey Ahmad Supian, who sustained injuries to his right thumb, and constable Muhammad Firdaus Abdul Rasid who was injured in the knee.

At this juncture, head of the Suhakam panel commissioner Zaiton Othman instructed to replay the 30-minute video clip evidence on the incident. She then asked Fariz to identify himself and to prove that the FRU personnel were hit by the car.

However, Fariz was unable to pinpoint his position but asserted that he was close enough to see his officers being knocked by the car. Following this, Suhakam commissioner Dr Chiam Heng Keng asked if he had rushed to the aid of the injured personnel, to which Fariz replied: "I did not, I was focussed on what was happening around me. I had to prevent my troops from more harm.“

Chang must have intentionally beaten up himself so badly in order to gain sympathy! It is not impossible because he will get some mileage if he showed he was abused by police.
I remembered many years ago Malaysian Prime Minister Mahathir Mohamad has suggested in the court hearing that Anwar Ibrahim's black-eye injury was self-inflicted.

Dr Mahathir told reporters that Mr Anwar might have hurt himself to gain public sympathy. "It's not impossible because he will get plenty of mileage if he showed he was abused by police," Dr Mahathir was quoted as saying by the national news agency Bernama. (Read the news here).
Source: Malaysiakini

http://dontkacau.blogspot.com/
**For A Better Future of Malaysia**

No violent was used in MEMALI and CHERAS. They were terrorists and SUICIDE BOMBERS. Who cares!!!

the bugger kicked and punched himself coz he wants the cops to look bad.
WTF. Can they train cops to lie properly?

gosh poor guy, i wonder what happened to him after that, since all the police said he knocked his own socks off.

Thanks for the link and I will visit your place.

You have a great poem.

I could not comprehend with the two incident but it could be contextual and analogous.

I think he must be more careful next time and should try not to scare the shit out of the police.

FRU was nowhere near jian haur!!!!

The poolice is still investigating the aliens that attacked him. It's believed that he stumbled upon a group of aliens in the midst of mating with local kangaroos.

KGB and FBI have been notified of this mystifying phenomenon. The public is advised to chant bolehsutra for protection.

Yeah, no police violence at all. The poor boy was just covered all over with love bites from sex-starved policewomen

the same analogy they use on so called corruption cases. See no evil, hear no evil!

Now all the crime just happen and nobody saw or witness it. in large crowded area. How you expect case to be prosecuted for private places?

However for some, even however private, the police can come out and drag the ... out of that person to lockup. Now how's that for gross incompetence or willful negligence?

guess this policeman must be thinking... why can't i when badawi keep lying all the time and najib lied about meeting saiful too.

That's a reminder from For Rough Use (FRU) police force, no violence yet!!!

It is truly mysterious!

As said by Hasilox, it is mysterious.

Yah mah.. no violence mah.. This is FRU's standards of violence. Maybe FRU's term of violence is maybe someone get beaten to death?

It is outright shameful to blatantly lie like that!! This FRU bugger gotta be the stupidest dickhead around to lie like that. Sometimes I wonder if these people understand the word integrity.

It is been said that Chang Jiun Haur is also conspiring to frame the police. Soon, Chang may also have to make a SD.

Our police cannot be trusted. Period.

But the police are suppose to protect the people from harm?

No violence??
who believe them?
Brainless?? with the video the still can deny?
police/AG/PM what you guys are doing??

Sounds familiar, where did this FRU learn to lie when TONS of video footage available?

The trademark of everything connected with this present administration. Even though the evidence is right before our eyes!

They still think we were born yesterday.

They are so brain-dead even a miracle will by-pass them because there is just no hope. *sigh*

sliding down fast into deep shit hole. be forewarn, another zimbabwee in the making is not too far away.
get ready to find a note printing company just like mugabe did to support the regime when the time comes.
wanna be a trillionaire? if so, continue to let BN run this country unfettered. but, you have to live with 3,000,000% inflation rate.
think i am lying like the cops did? just take a flight to zimbabwee and enjoy your time in the company of billionaires and trillionaires.

You've got a good point.

It's hard to fathom.

It's real; it's unfortunate; it's continuing.

Do you wonder how that baton got broken?

Thanks and I had visited your blog.

Do you happened to have the picture of the baton?