PLUS Net profit rise to $768 million 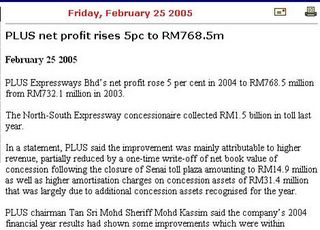 PLUS Expressways Bhd’s net profit rose 5 per cent in 2004 to RM768.5 million from RM732.1 million in 2003. The North-South Expressway concessionaire collected RM1.5 billion in toll last year. In a statement, PLUS said the improvement was mainly attributable to higher revenue, partially reduced by a one-time write-off of net book value of concession following the closure of Senai toll plaza amounting to RM14.9 million as well as higher amortisation charges on concession assets of RM31.4 million that was largely due to additional concession assets recognised for the year. On a quarterly basis, PLUS’ net profit improved by 14.3 per cent to RM222.3 million in the final quarter of 2004 from RM194.5 million recorded in the fourth quarter 2003, primarily attributable to higher revenue. Total revenue for the fourth quarter of 2004 also improved to RM441.4 million, a 2.9 per cent rise compared to the fourth quarter of 2003’s RM429 million.

So, see the figures yourself.... It is $768 million profit over the revenue of $1.5 billion, that is, almost 50% net profit margin. And, they are continually going to raise toll charges, which means their profit margin will keep growing at the expense of taxpayers. The consumers are contributing to make them billions each year and the government had given them an agreement to make sure it happens.

For the record, about 40% of the North-South highway was built by the Malaysian Highway Authority before being privatised by the government to PLUS. Billions were expended and incurred by the government which was sunken cost. PLUS did not compensate the government for the cost expended. The irony; PLUS is collecting tolls every streches of roads built by them and include all those not built by them. PLUS spent approx. $6 billion to built the highway which in total would had cost more than $10 billion and they are collecting tens of billions of tolls over the last decade. Aren't the taxpayers becoming suckers??? Ironically, the Jelapang Toll reconstruction project, the government had agreed to pay $120 million contribution to PLUS....WHY??????? Because the toll booth was originally not built by PLUS....but revenue derived is collected by PLUS. So, PLUS is not responsible to pay for construction and is claiming the rights to collect all revenue from it. Good agreement! Good government management.......
Posted by Maverick SM at 2/25/2005 01:59:00 PM