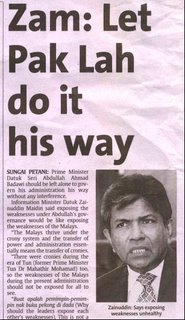 Information Minister, Datuk Zainuddin Maidin, popularly called Zam said “The Malays thrive under the crony system and the transfer of power and administration essentially means the transfer of cronies.

“There were cronies during the era of Tun (former Prime Minister Tun Dr Mahathir Mohamad) too, so the weaknesses of the Malays during the present administration should not be exposed for all to see.

“Buat apalah pemimpin-pemimpin nak buka pekong di dada (Why should the leaders expose each other’s weaknesses). This is not a healthy exercise,” he said yesterday.

Zainuddin said abuse of power and misappropriation of funds were bound to happen under the crony system.

“This cannot be denied. And the Prime Minister is trying his best to rectify the situation his way. Tun should let PM (Abdullah) do it his way,” he said.

Zainuddin said Dr Mahathir’s attacks against Abdullah would only benefit Pak Lah as he would gain more support and empathy from the rakyat.

He said Abdullah, who has been in office for only two years, should be given a fair chance to run his administration.

I NEVER believed it!!!

I don't know whether my Malay buddies and friends and those that I don't know, who called themselves Malays, will believe this shit.

"Malay" thrives on Crony system? Is it true, my dear Malay friends and citizens?

OMG!!!! I can't believe it... it came from the mouth of UMNO information secretary and also Malaysia's Cabinet Minister.

How would foreigners take this piece of news? How would they look at the Malays? This statement connotes that Malays cannot, and can never, thrives on meritocracy and hardwork...

Ali Babaism is here to stay. APs are here to stay. Handout cultures are to be calcified and entrenched into our constitution so that the Malays will be clutched and armed-chaired driven.

I hope Dr. Bakri Musa and his cohort Din Merican and the many Malay intellectuals can enlighten us. Is Khairy an Intellectual? I don't know now because he will be joining the Mat Rempit. I hope Mahathir can also enlighten us on this "New Paradigm".

Does Pak Lah have the ability to also enlighten us, since his son-in-law will be joining the Mat Rempit which will be re-branded and officiated by him?

Let's hear what the Deputy Prime Minister, Najib Tun Razak, had to say:

The Malays have to stop the hulur (handout) culture if they want their community to be one that is excellent and respectable, said Deputy Prime Minister Datuk Seri Najib Tun Razak.
If those who practise such culture become leaders in the party, it would lead to a weak Umno, Najib told delegates at the Ledang Umno division meeting here yesterday.

Najib said this in reference to a popular notion that a way to lobby for support is to give below-the-counter payments.

“The hulur culture, as a means to lobby for favours, will not help the Malays become an excellent community,” said Najib.
“Times have changed. Wealth and riches no longer come with having land grants,” Najib told Muar Umno at their delegates conference.

Citing Bill Gates as an example, Najib said he became the world’s richest man and powerful because of technology.

“He is so powerful that he can invite the president of China to visit his house in the United States.
“He uses his brain and mind to develop the information technology needed for the computer system,” he added.

Najib said education was important and the Malays should continue their quest for greater knowledge, including in technology.
“We in Umno cannot just shout the words Hidup Melayu or Hidup Umno to become strong as they are only slogans.” Ya, Najib, and wielding the keris is another slogan. Are you refering to Hishamuddin and Khairy, directly?
Najib said Umno did not struggle for the Malays to become Mat Rempit (illegal street racers) or to have HIV but to excel in politics, economy, education and other fields.

Najib said due importance to knowledge and technology would make the Malays a successful and powerful race.

Oh, by the way, did you mention Mat Rempit? I think Howsy the Ranter wrote something about this. And UMNO Putera also spoke about this.
UMNO Putera Chairman, Datuk Abdul Azeez said that Illegal motorcycle riders or "Mat Rempit" will be rebranded by Prime Minister Datuk Seri Abdullah Ahmad Badawi at an assembly in the Bukit Jalil National Stadium this November.

He said the rebranding of Mat Rempit was to change the illegal race participants' image towards something better, and "we are thinking of a suitable name like Mat Cemerlang (Excellent Mat)."
Abdul Azeez said several things that could be learnt from these illegal riders were their strong camaraderie and a large membership of at least 5,000 riders despite being an unregistered illegal club.

"Due to this strong bond, 30 Mat Rempit will beat us if we "cause trouble" with its members," Azeez said.

"We could not stop them to continue with their [illegal] interests but we can guide them (by following them) to find a direction," Azeez said.

Abdul Azeez said they should not be perceived as a threat, adding that, "If we cannot stop them, we join them."

Abdul Azeez said this Aug 26, he and Umno Youth Vice Chief Khairy Jamaluddin would come down to the ground on their motorcycles to meet the Mat Rempit. 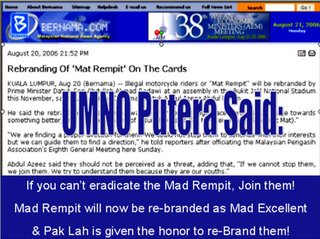 Oh shit! Illegal race riders will be legalised and promoted and rebranded to be called Mat Cemerlang. Oh my god, is this the Malaysia we were?

Now, UMNO, UMNO Youth, and UMNO Putera, Pak Lah, Khairy, and Azeez, are endorsingto legalise illegal racing...
and, if you find trouble with those racers, such as, obstructing their racing on the street and highways, taking away your girlfriends and childrens for a race-ride, overtaking them, or, riding next to them, and if anyone of the Rempit don't like you, 30 of them will beat you up (Azeez connoted). And Azeez said, we can do nothing? Does he mean that our law enforcers can't do anything? The police can't do anything if Rempit beat up a member of the public? Does Azeez mean to tell us, we got to bow to these Mad Rempit? Oh my God, Azeez is UMNO Putera Chairman and a Muslim. Is he guided by the Holy Quran or did he read the wrong "Book of Knowledge"?

Azeez said these Mat Rempit could actually be assets in building Malaysia if they were given the chance.

Oh ya, Azeez, UMNO should make them ministers and Prime Ministers of Malaysia ... then, there will no more be corruption and crime because these traits would have been legalised and entrenched within a new Rempit Constitution of Malaysia.

Oh my god, the whole nation, led by UMNO and UMNo Youth, worse off, with UMNO Putera "guiding principles", will be driven to the dogs ... anarchy will rule the coming years and we all must join them ... as Azeez preached (because we can't stop the Rempit, we become Rempits too).
Posted by Maverick SM at 8/21/2006 12:44:00 PM