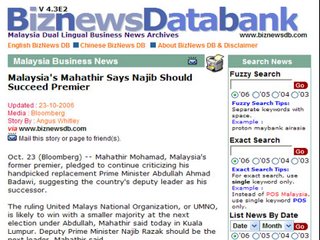 Mahathir said today his legacy is ``being chipped away'' by the current government.

Deputy Prime Minister Najib Razak should be the next leader, Mahathir said.

Mahathir's comments suggest the two-hour discussion with Abdullah failed to end months of feuding. Mahathir has accused the prime minister of jeopardizing economic expansion and achieving nothing since taking over in 2003. Abdullah had said he hoped the meeting might resolve the dispute.

Mahathir said he didn't ask the prime minister to step down yesterday.

``I was there to tell him what I am not happy with,'' Mahathir told reporters. ``I was not going to suggest what he should do. It's up to him to decide what to do.''

"I pointed out to him that firstly this country has become a police state because any time anybody who invited me to give a talk would be called up by the police to withdraw the invitation," Mahathir said.

"I told him I will continue to make criticism. I will go on in my usual way but I do hope that this habit of asking the police to frighten people should stop and my civic right should be restored and I have a right to speak to UMNO and any audience I like," he added.

"It is now up to Abdullah to "undo the wrongs" or resign, said Mahathir.

Is this a Hari Raya declaration of an all out war?

This isn't a nice Hari Raya present for Pak Lah.

Says the guy who was responsible for Operasi Lallang and the sacking of five (count 'em and weep, hombres) honest judges.....to the guy who had released a group of suspected terrorists from ISA and also, despite the follies of Khir Toyol and his UMNO associates for the past few months, have 'permitted' the press to report freely on it. Quite a change from the past, wouldn't you all agree?

Its kinda like Mao Tse-Tung accusing Nikita Khrushchev of being a Capitalist Revisionist.

Look who's tokking! Police state -- if Yes, those two UMNO councillors should be behind bars by now and flogged and cokked (Did I spell the lust word light?)

Pray very hard for your PM;

Tun is getting the flak for all the ballistics within 24 hours of smoking the peace pipe!