Who's Who in Maya Maju 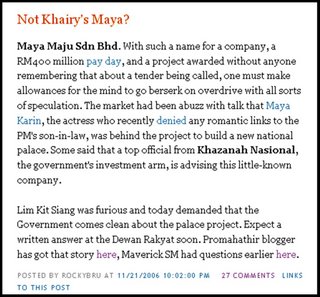 Thanks to Rocky, he mentioned CTSB in his article and that sends hundreds of his fans visiting CTSB.

Works Minister Datuk Seri S. Samy Vellu said work on the new Istana Negara, to be built on a 96.52ha site atop a hill, will start next June and was slated for completion in 2009 which would cost the government RM400mil. However, no one heard of any tender being published and it had to be presumed that it was a negotiated turnkey-design-and-built project.

Kumpulan Seni Reka Sdn Bhd has was mentioned as the appointed project architect and Maya Maju Sdn Bhd was named as the building contractor.

Many people, including Rocky wanted to know who the hell is Maya Maju Sdn Bhd. Names like Syed Mokhtar's MMC & IJM, UEM, Peremba, Tan Sri Talha's and Lin Yung Lin's Gamuda, Roadbuilders (now SM's IJM owned), Ahmad Zaki's AZRB, Tan Sri Abu Sahid's Maju Holding Bhd, Salleh Sulong's DRB (now belongs to SM), Ranhill's Hamdan, YTL, Pak Adib's Arena Engineering, Tan Sri's SNA, and so on, they are familiar to most of us - they are the King-pin of the Malaysian construction industry. But Maya Maju? Who's that? Who owns it and what's it's track record? 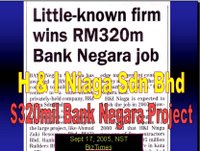 Some time ago, we heard of Bank Negara awarding a RM320 million contract to buid a resource centre to a little known privately-held company, H & I Niaga Sdn Bhd. The award surprised major construction companies which had been bidding for the large project, like Ahmad Zaki Resources Bhd, PECD Bhd, Ranhill Bhd and UEM Builders Bhd.

H & I Niaga was involved in the problematic project involving the construction of the Royal Malaysian Navy Recruit Training Centre in Kota Tinggi Johor. They are also the contractor for Cheras Velodrome Project and some projects awarded by UiTM. NST BizTimes reported that the company had failed to pay levy owed to CIDB. The company had also failed to submit its profit and loss accounts for the past 3 years to Companies Commission Malaysia and had failed to file its accounts for the financial years ending December 31, 2002 to 2004.

H & I Niaga later issued a two-page statement to answer point-by-point all the issues raised by the Press and the Federation of Malaysian Consumer Associations. The company said while it was involved in building the Royal Malaysian Navy Recruit Training Centre in Johor, it was not involved in the construction of the defective roof structure of the hall complex.

H & I Niaga went on to say reports of it being reprimanded by government ministers over the Cheras Velodrome project were also untrue as it had completed its job to upgrade and renovate the facility within the stipulated time and had even been given letters of appreciation for the job. The company also answered Fomca’s query on its failure to file its accounts for the years 2002, 2003 and 2004 with the Companies Commission of Malaysia (CCM).

H & I Niaga said it had run into technical difficulties in 2003 causing a two-year delay in the of filing its profit and loss accounts. H & I Niaga clarified that they had since resolved the problem and has submitted the company’s audited accounts for the years 2002 and 2003 to CCM, while the final accounts for the financial year ended December 31 2004 have been audited and are pending submission. With regard to the payment of levy to the Construction Industry Development Board (CIDB), H & I Niaga said they will resolve the issue before October 25 as allowed for by CIDB.

Coming back to Maya Maju, the market had been abuzz with talk that Maya Karin, the pontianak actress who was recently rumoured to be romantically linked to Khairy Jamaluddin, the PM's son-in-law, and also rumoured to be using Hishamuddin's supplementary platinum card (this is another rumours). It was insinuated that Maya was behind the project to build a new national palace (some kind of payment in kind for service rendered). Some said that a top official from Khazanah Nasional, the government's investment arm, is advising this little-known company. I repeat: this is pure rumours and don't believed it. 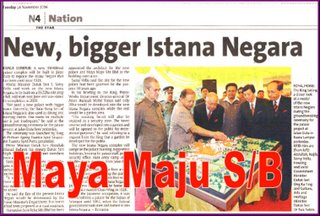 I believed that the company may have changed it's name to Maya Maju (Malaysia) Sdn Bhd as the published accounts at RoC is recorded up to 1993 (I can be wrong).

Did it sounds interesting to you? Analyze the Shareholders, the Directors and secretaries???

But why have 5 Directors, two Chinese company secretary, when the shareholders are 100% Bumis? Don't guess! It's against UMNO Malay Agenda. However, without the king-paymasters behind, the Bumis can get the project but can't pay and financed the implementation of the project; even the performance bond of 5% contract sum would amount to RM20 million. The rule of the thumb is that contractors will need at least 20% working capital and at least another 30% cash flow as this is a design-and-built project (that is approx RM100 mil). I was even told that the proposed project was a some kind of payment-in-kind, that is, contractor to built the Istana and in return will not receive money but a substantial piece of prime land worth a lot. I can't confirm it.

But the directors' names rings your ear and you can continue from here to do the research.

No insinuation please, and it could be seditious. Read what the DPM said today: 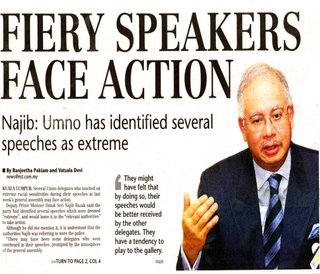 Email ThisBlogThis!Share to TwitterShare to FacebookShare to Pinterest
Labels: Khairy

Bugger.. tell la who and who in maya maju? Why ask us to do research... You think we're damn researcher ka? Tiuuuuuuuu

Lucia, not true lah. This is my knowledge territory and I have been in this area of research for many years. I can't blog like Jeff as he has the support of "little birds" and he is also "sponsored" by "key" others.

interesting bits of info and "rumour updates" but what do you mean by rings your ear?

do you mean it rings a bell? or is this some kind of new expression/idiom?

This is interesting. Thanks for the rumours, mave.

I started my research and found this site http://www.cimb.com/index.php?ch=group_ch_acg&pg=group_pg_acg_cd∾=474 , which shows the following:

The 2 chinese names are pure professional service providers (in the field of corporate secretarial services).

I doubt if they have any equity interest in the project.

You will find them listed as senior executives of a prominent corporate secretarial outfit linked to a 2nd tier accounting firm located across the road from Maju Plaza on Jln Sultan Ismail.

i asked my family not to vote ARMNO anymore!!! i will! that's stupid party make us die and poor!! now i believe that KJ have interest to maya karin!! we could not choose someone unclean!! and corrupt!! like umno peoples...come on malaysian get up

Any one interested to find out big big problem happening in bank negara - due to poor project management, workers were injured and some died. H & I niaga no competent for the job. They dont observe safety rules.. they should be omitted from construction industry.. innocent lives were lost due to their incompetencies

If you have the stories, you can write in here or sent to me at: ctsb2008@gmail.com

Do u have any more news relating to H & I Niaga doing a project for Bank Negara - Execution and completion of main building and external work for Money Museum. There are few sub-contractors suffers due to non finalisation of the work done..