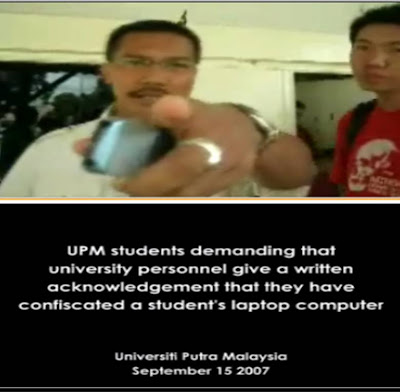 Did you see how government officers acted as if they are big time gangsters?

You can see them in UPM.
In Malaysia, it isn't just police brutality. The bullying culture and values are ingrained and adopted by the governmental department officers as a way to intimidate the citizens and to pressurized them to be subordinated and become pagans.

In the previous episode, it was the student union members who was bullying the other students. This time it is the officers from the student affairs department (HEP) in Universiti Putra Malaysia (UPM), raided the hostel room of the student, confiscated his laptop, handphone, MP4 player, pen-drives, leaflets and personal documents.

How is it that the law now can be exercised arbitrarily and with powers unlimited by basic officers? Has Malaysia now become a police state? It is observed that we now have become far worse than the communists in the way power had been exercised and citizens being intimidated till they are subdued and machinated.

It is about time the people of the nation wakes up to explicitly and expressly indicate to the government that we would not accept a police state in whatever form and clothes they dressed up with. We are fed up with all these form of intimidation, suppression, and oppression. This message must be clear and unequivocal.

Apparently the officer confiscated those items and did not want to issue an acknowledgement for them. He tried to get away in his car but several students blocked the path of the car and the police came. What was the outcome? I don't know the ending.

If the officer had his way, all the items would have disappeared and he would go round looking for other victims!

The universities are going to the dogs! How can there be excellence when the Minister for Higher Education doesn't even bother to sort out these basic issues?

thuggery abounds and the ruling party has no qualms in using that as a tool of control and submission. this has even permeated into the lower levels of administration and shamefully such behaviour exists in universities. guess like they say, monkey see monkey do.

I think we have lost it. There is absolutely no respect for the rule of law

if you asked Nazri, his probable answer is that such thuggery behaviour is normal and acceptable. This is in line with universities objective of producing compliant robots; who cares whether these students are one day employable or not.

The students learn such behaviours and practice them. Then only our Malayammar dream will come true!

what kinda fucking university is this????!

This list is a common knowledge to a lot of Malaysians, especially those non-malays (Chinese, Ibans, Kadazans, Orang Asli, Tamils, etc) who were being racially discriminated.

This list cover a period of about 50 years since independence (1957).

(1) Out of all the 5 major banks, only one bank is multi-racial, the rest are controlled by malays

(2) 99% of Petronas directors are malays

(3) 3% of Petronas employees are Chinese

(7) 5% of all new intake for government army, nurses, polices, is non-malays

(9) 2% is the percentage of non-malay government servants in Putrajaya. But malays make up 98%

(11) 95% of government contracts are given to malays

(14) 100 big companies set up, managed and owned by Chinese Malaysians were taken over by government, and later managed by malays since 1970s e.g. MISC, UMBC, UTC, etc

(16) 2 Chinese taxi drivers were barred from driving in Johor Larkin bus station. There are about 30 taxi drivers and 3 are Chinese in October 2004. Spoiling taxi club properties was the reason given

(30) 50 cases whereby Chinese and Indian Malaysians, are beaten up in the National Service program in 2003

(40) 1 Dewan Gan Boon Leong (in Malacca) was altered to other name (e.g. Dewan Serbaguna or sort) when it was being officially used for a few days. Government try to shun Chinese names. This racism happened in around year 2000 or sort

(43) 1 Catholic church in Shah Alam took 20 years to apply to be constructed. But told by malay authority that it must look like a factory and not look like a church. Still not yet approved in 2004

(46) 30 government produced TV dramas and films always showed that the bad guys had Chinese face, and the good guys had malay face. You can check it out since 1970s. Recent years, this tendency becomes less

(47) 10 times, at least, malays (especially Umno) had threatened to massacre the Chinese Malaysians using May 13 since 1969

(49) 100 constituencies (parliaments and states) had been racistly re-delineated so Chinese voters were diluted that Chinese candidates, particularly DAP candidates lost in election since 1970s

(53) 50 cases each year whereby Chinese, especially Chinese youths being beaten up by malay youths in public places. We may check at police reports provided the police took the report, otherwise there will be no record

There are hundreds more racial discriminations in Malaysia to add to this list of "colossal" racism. It is hope that the victims of racism will write in to expose racism.

Malaysia government should publish statistics showing how much malays had benefited from the "special rights" of malays and at the same time tell the statistics of how much other minority races are being discriminated.

Hence, the responsibility lies in the Malaysia government itself to publish unadulterated statistics of racial discrimination.

If the Malaysia government hides the statistics above, then there must be some evil doings, immoral doings, shameful doings and sinful doings, like the Nazi, going on onto the non-malays of Malaysia.

Civilized nation, unlike evil Nazi, must publish statistics to show its treatment on its minority races. This is what Malaysia must publish……….

We are asking for the publication of the statistics showing how "implementation of special rights of malays" had inflicted colossal racial discrimination onto non-malays.

can you beat that after 2 tries, student is still unable to lodge police report. geez, the police is supposed to uphold law and order, yet it appears to side the thugs in the university by warning the student to toe the line. what sort of police force is this? now, i think they dont even deserve the huge raise in salary.

What has the IGP got to say about this? Cannot make police report? And the Sri Serdang OCPD also warned the student? See Jeff's Ooi's account In Screenshots.

I just saw the clip from Screenshot. WTF...