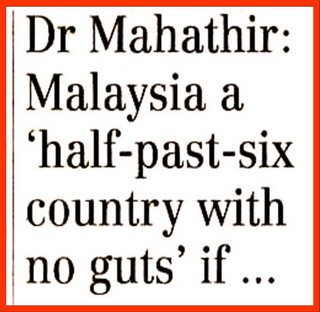 "... I think this is a half-past-six country which has no guts," former prime minister, Tun Mahathir Mohamad told reporters at the Kuala Lumpur International Airport on his return.

"I promised not to interfere in politics... and
I have not said anything about many things done which were wrong.

Mahathir said he had kept quiet on so many things which were done wrong, and he said nothing. Now, he tak boleh tahan lagi, because the wrong is beyond his tolerance.

"The issue had nothing to do with UMNO disunity and was about [my]self-[need] respect."

Asked why he had not given his recent open letter to Prime Minister Datuk Seri Abdullah Ahmad Badawi instead of distributing it to Umno members, Dr Mahathir said:

"I did not write the letter to him. What for? Even if I talk to you (the media), it won’t see the light of day in the papers. "Even if I were to give it to you to publish, you will not do it. "Even if you do, Kalimullah will chop it," he said, referring to New Straits Times Press deputy chairman and editorial adviser Datuk Kalimullah Hassan.

"I am unhappy only when you kowtow [not to me]."
So, Mahathir also found Kalimullah is the chopper, terminator, and ball-carrier. But this man also carried Mahathir's ball too?

To Mahathir, "they bite the hands that had fed them [before]."

Do you see the similarity here, Mave?
Then:-
Tunku Abdul Rahman vs Dr M.
Now:-
Dr M. vs Pak Lah.
History repeats itself. As sure as the sun rises and sets each day.

Amoi,
Call it the law of coincidence. However, history has and will always repeat itself; for better or worse.

I just felt it is good for the nation as it will wake up the regime who are side-tracking the mission they were mandated.

To quote from George Santayana:. "Those who cannot learn from history are doomed to repeat it."

Or isit sort of it the karma thingy?

And this is reposted from Amoi's blog:

Oooohh...it's gonna be big this time!

Time to make peace with Ahn Hua and form a greater opposition party?

What goes around comes around!

Like my boomerang which my Oz gF gave me 12 years ago, I threw it once into the air and 12 years later IT came back to its master. Vely loyar buluk:)

Desi, I have you recorded with How and Moi; three of you are collaborated Musketeers. Amoi remains sober, most of the time.

Desi, can you tell me more about the boomerang which your gf gave you 12 years ago?

Time for a socio-politico bloggers gathering, eh? Can you organise one? But Amoi has to travel all the way from JB and me-from the UK!

Ya Howsy, we can have one on-line as it is too costly to gather, unless you are prepared to spent a fortune to be back. Tell me if you can.

Don't worry when I'm back, there will be a bloggers gathering of course.

Wah - such an interesting conversation going on here which I apparently missed b'coz I've been "under-cover", duh! 3 Muskets? Not Funtastic 4 meh?