PM: I have no interest in Iraq Scheme

"...recommending people for opportunity to “participate” did not imply in anyway been involved" Pak Lah said.

Prime Minister Datuk Seri Abdullah Ahmad Badawi has clarified that he has no interest in the Oil-for-Food programme in Iraq.

When asked to comment on articles in a website which implicated him in the Oil-for-Food programme, he said: “The website can say whatever it wants. I know what I have done. I do not have any interest of any sort.”
The website had said that Abdullah’s name had been linked to two companies that were beneficiaries to more than 50,000,000 barrels of Iraqi oil which were said to be valued at RM11bil. 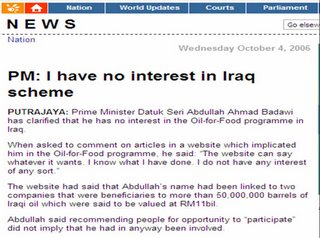 Nobody accuse him; only Mahathir!

He shouldn't be directed to the websites as the culprit.

He should respond to Mahathir only, the only man who accuse him and along with his bodeker Matthais.

The poser is: reasonable knowledge that an act would lead to another malicious act, or that an omission to act could be an implied act in concert. Corruption not only mean taking something with malicious intend, it does include abuses of power and influence (as per Anwar's case). Participation does not mean active and direct involvement; it includes acquiescence with the knowledge of an act that is immoral or for which is against positive law.

I give the benefit of doubt to Pak Lah but he cannot absolved himself in it's entirety. He should have known or when it becomes known, he should have acted to mitigate.
Posted by Maverick SM at 10/04/2006 10:42:00 AM

His explanation carrys no credibility after he denied certain allegations which proved otherwise on national TV.;-(

Having said that, I'm not accusing him of being involved in the oil scandal. Merely pointing out his words carry no credibility nowadays.

The onus is on the Prime Minister to answer!