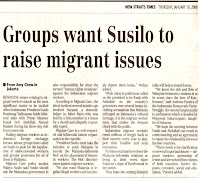 Hailing migrant workers as Indonesia's foreign exchange heroes, Indonesian labour groups have called on Indonesian President Susilo Bambang Yudhoyono to push for the legalisation of undocumented workers and greater protection for all of them in Malaysia when he holds bilateral talks with Prime Minister Datuk Seri Abdullah Ahmad Badawi during his three-day visit from tomorrow..

"President Susilo must take the initiative to push Malaysia to amend the Malaysia-Indonesia MoU on the placement of domestic workers. The MoU discriminates against migrant workers.
While Jakarta politicians called on the president to be direct with Abdullah on Indonesia's grievances over several issues including accusations that Malaysia infringed on Indonesia's cultural heritage, it is the migrant worker issue that strikes the deepest chord with the public.

According to Migrant Care, the latest incident several months ago involved Suryani, a domestic helper in Johor Baru who was held by a Rela member in a house for a month and allegedly repeatedly raped.

Migrant Care is a well-respected and influential labour organisation in the republic.
"We also want Malaysia to legalise illegal workers and not simply deport them home," Wahyu added.

The powerful Indonesian Labour groups wants their President to ask the Malaysian government to take responsibility for what she termed "human rights violations" against the Indonesian migrant workers.

Is it true that our government do not respect human rights? Have we become an authoritarian country practicing Totalitarianism? Have Malaysia become such a scary country?

Najib and Nazri got their heads shoved so far up their asses, they can't see daylight anymore, ni kan pulak human rights.

But really legalise illegal workers....? Yeah I'm not so about that one....

You mean illegal migrants need to be given legal citizenship which comes with NEP status?

Are they going to start paying taxes or something?

Legalizing the illegals is the demand from Indonesian Labour group. Well, it's about an unreasonable demand to the unreasonable and unfair government.

So, two wrongs can make one right.

very smart of the indonesias.they are trying to hit their luck just because US is allowing immigrants from south america to be citizen and thought why not malaysia allow the same preference. Go fly kites! NO thanks to khairy for opening his mouth! his mouth need to be plastered with cement!

Is this what we call Globalization?

But illegals wanted to be declared and given legality? If that's the case, then criminals may also want to be exonerated?

Ha ha .....
I think the Indonesians know that in Malaysia, illegals can be legalized with the 'right approach' while seemingly legal pursuit can be treated as illegal by our enforcement with trump-up charges.

Surely they know with thier help, Malaysian statistics can very quickly tilt the racial statistical scale from 70:30 to 90:10 in no time. Of course KJ will have a much bigger voice by then but maybe they will have to think the big voice to drive the 10% or to move the while country...

maverick sm, I was doing a theretical Khairy from your piece.