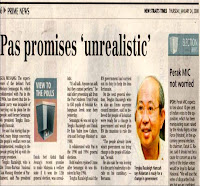 Tengku Razaleigh Hamzah said the past experiences and collaboration of Semangat 46 & PAS has shown that the Islamic party was incapable of carrying out its plans for the people.
"Malaysia a welfare State? Unrealistic! It's all talk," said Tengku Razaleigh.

We had reap what they sowed.
The Malays agree with what UMNO did in the name of BN .
The Bumiputeras agreed that the NEP benefits them and they want the NEP.
The Malaysian automobile owners agreed with the tens of billions used to fund fuel subsidy which provides the neighbouring countries privileges from our welfare system.
Malaysians enjoyed many other subsidies such as rice, wheat, flour, sugar and most essential food.
We are a welfare state; that's certain. However, we are a welfare state that consistently maintain the poor as poors. We are a welfare state that divide our citizens into two category - Human & unHuman, a Bumi or a NoBody.

We are a welfare state that award projects to Malays, largely from UMNO (and include Indians in UMNO), and few others, and then they go and sell these projects to Chinese and Indians who then had to "engage" a Bumiputera partner by registering his interest at 30% who is then required to sign back a blank transfer form of that interest with a caveat that he will get a Mercedes Benz and a holiday trip to New Zealand or Spain with his girlfriend, plus monthly pocket monies and some financial contributions to some "Building funds".

The Double-tracked Railway from Seremban to Gemas is awarded to Indian Railway (IRCON). So you see, Indians had benefited from the NEP.
We are a welfare state; no doubt! More so, we are a charitable state. Our subsidies of multi billions in petroleum and fuel had help to cross subsidize Singaporeans, Thais and Indonesians. Bernas smuggled rice even though they had APs. Our welfare state had bailout PKFZ in billions and many others who had failed.

after the charity, they tell you that you stupid moronic voters will have to pay for it. they reap the glory, idiots who voted BN year in year out will bear the brunt. shit, the voters deserved what they get. for goodness sake, dont gripe no more.

Yes, we are a charitable welfare state.
But, it will come a day when Malaysian wake up & found that we are broke & we are even worst off than our neighbours in Thailand, Indonesia & Myanmar.
Many Malaysian (i.e. Voters) are still sleeping....

Welfare state? If we talk about welfare state in its real sense, England is much more Islamic than almost all Muslim countries.

I agree with you that England is a welfare state as compared to many Muslim countries but not more Islamic. Paradoxically, being a welfare state is Islamic and as such you may be right.

I love your quote by Benjamin Franklin. Howe true!

Truly appreciate your comments. Would be glad to respond to your points if you had sign-in using a moniker or pen-name.

Bakaq, now can we compare the England to Malaysia? heaven n hell in so many ways. our welfare state takes from the poor and give to the wealthy! actually i do not want a welfare state but just ask the government, for 50 years what have they done, successfully, to bridge the gap between the poor and the wealthy? on the contrarary, i think the gap is widening...! what about state of education in the hands of BN? Kanine! we still have politicial referring 'free choice of voting' to 'causing another may 13'!

I tell you, we ordinary Rakyat have been given the mushroom treatment. keep us in the dark n feed us shit.

And to think that Dollah is asking for more time to deliver his promise...ask him to see MR Loo Kiam Kam also!

In many nations, including United States, the gap between the rich and the poor is also widening. It is largely attributed to the capitalist system of Laissez-faire doctrine.

But the greater difference and contradiction is the fact that the system of government is actively seeking to protect the minority's rights in society and do not have laws and rules that factually and evidently suppress or oppress them in areas such as education, business rules, health services and most of all they had a social security system to provide a welfare system.

We have a system that exclude a large portion of citizens from getting employment in govt services by virtue of discrimination in promotion opportunities and the disrespect for meritocracy.

We have a PKK licensing system that exclude non-Bumis from participating legitimately in contract procurement and govt projects. But the govt claim that the non-Bumi still gets projects by the back door after paying massive under-table sums.

We have unwritten rules that do not allow non-Muslims to pray to Allah or uses the word Allah to refer to the one and only God. We have no right to participate in peaceful assembly, no right to a fair trial by virtue to ISA laws, and no rights unless approved by the ministers on matters provided under the constitution.

Poverty is not the only dilemma. What is lacking is basic human rights as citizens and a good government that is free, fair and competent. Corruption is so rampant that we hardly bothered to call it by its name; we call it kautim.

why is it i feel you are leaning towards 'benevolent dictatorship' system because obviously the open democratic system is failing miserably?

Did I? Maybe... I did; could I have been absorbed into the system dysfunction? Maybe, I did!

Yeah, welfare state. The problem over here is, not those poor or needy ones are on welfare. It's the rich and greedy that's on it. How to make sense of it? Sigh

leakages everywhere. becos of these "positive discrimination" ALL the rakyat is getting poorer without realizing.

welfare state? dont think so mav. prob it is a donation / handout state.

people who get welfare from the states are categorized as those who lost their job and have family to feed, the old and elderly, the handicapped, single mother? etc.

people who get donation / handout are like beggars sitting by the corner waiting to be given money and most of the time who dont deserve to be given becos they are just plain lazy to get a permanent job.

What welfare state? malaysia is a FAILED state!

Well, in Malaysia we have different dictionaries; we call Allah a Muslim God of which prophet Muhammad said he did not come to create a new religion or God but the same God as Abraham, Moses and Jesus.

In our dictionary, we define equality differently. We also define freedom differently, and others such as Internal Security & Threats, Privilege and Rights, Competency, meritocracy, etc.

We have different dictionary; just that!

mav,
Laissez faire cannot be faulted for a true LF is a perfect system for all. In USA, there is also government intervention in its economy (eg textile, electronics..etc). Little by little, these seemingly harmless intervention tainted the LF and created what we them as today. but to convert to dictatorship or a socialist economy...whooohh...no way. you seriously believe any country that has accepted LF before can convert to a socialist economy successfully? with the ppl having better off than LF? i think it will create more problem than solving it.

There is no true laissez-faire system. It's idealistic and altruistic in nature. Ultimately you still see the FED and the US govt interfering the market place to stabilize any irrational exuberances.

Look at the USA today, the stock market is crumbling due to the sub-prime mortgage debacle and the FED and the President of US is interfering to stabilize the market. That's against LF doctrine.

When any country's political system is in trouble or the country is in financial crisis, autocracy and dictatorship is the call of the day to stabilize the nation and to prevent it from falling into anarchy. After that, democracy may return.

These are the basis of governance and it's contemporary governance.

You did not mention that in the US, anyone born in the USA has the possibility of becoming President, even if you are a minority.

You did not mention that in the US, anyone born in the USA has the possibility of becoming President, even if you are a minority.

Or democracy may never return. ref pakistan..or or maybe thailand. maybe when we talk about arab saudi...i would not want that. dictatorship is only a cry of desperation at that point of time but when you think rationally of what it may later cause...brrrrhh. This gets me thinking...Najib keeps mentioning that riots would happened and may 13 again if BN is not in power. maybe this is a hint. what if opposition win big this round? By then, you will get your dictator from BN. see any reasonable justification to it?

Ya, it's true that any US citizen can be President; in the literal sense. But observe Obama, he's struggling and you know why.

Ours is controlled democracy; it's fine as long as you tag along.